The second of three debates celebrating 50 years of OCS 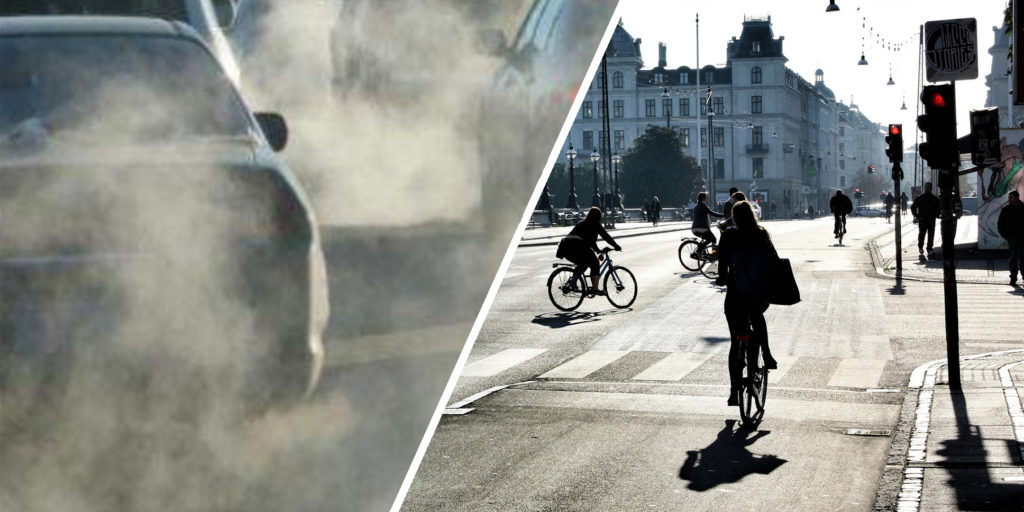 Cutting pollution in Oxford was the subject of Oxford Civic Society’s second public debate. Chris Church of Friends of the Earth spoke about the need for a more radical Oxford approach to the widely recognised problems linked to climate change, including pollution. Criticising this strategy was Councillor Paul Harris, Liberal Democrat environment spokesperson on the City Council.

There was little disagreement about the desirable ends to be achieved in tackling this major problem facing us all, but there were differences in terms of the means to be used, especially the pace of desirable change in our everyday lives. The Council’s Zero Emissions Zone (ZEZ) policy was forensically examined; too slow said Chris Church, ‘socially regressive’ said Paul Harris – small businesses and less well off people will suffer most. With 26,000 vehicle trips into and out of Oxford every day, Chris Church said we needed to act now, and think hard about the damage to health and steeply rising NHS expenditure. Free buses, more cycling, road user charges, and increased technological innovation were advocated. Many more suggestions came from the alert and well informed audience; trams, non-diesel trains, an improved cycling infrastructure along our streets, less car ownership and better shared transport (the trial of the ‘Pick Me Up’ bus service was much appreciated) were all cited.

Norway was much talked about, with its 47% electric car ownership being linked to its cheap hydro and wind-powered electricity supply. But against this perfection was Norway’s high carbon footprint linked to wholesale electric car manufacture! Other countries were referenced; Spanish cities’ high levels of central city pedestrianisation, Freiburg’s trams and Holland’s electric bike sales at a 47% level.

Some in the audience shared concerns about the Council’s ZEZ proposals adversely affecting central Oxford small businesses. Paul Harris referred to the Ricardo consultant’s observation that in the proposed first phase, there would be ‘insignificant benefits’ and that, by implication, the strategy was to change hearts and minds and ‘lifestyles’ of Oxford residents and shopkeepers, many of whom, as well as delivery firms, can’t afford electric vehicles. The limited consultation with such citizens and businesses was a further criticism.

There was concern about the impact of many electric charging points in already crowded streets, the apparent ignoring of the elderly and disabled and, more than anything else perhaps, the lack of positive support and funding from central government, including the active promotion of technological research. Chris Church added that whilst the de-carbonising of homes and vehicles is feasible, harder problems lie in dealing with agriculture and aviation. (When is your next intercontinental flight?!)

One audience member added that pollution and climate change were shaping up to be such an existential threat we would soon have to face up to making radical changes to our daily lives, just as in times of war: serious food for thought!

1 thought on “Cutting Pollution in Oxford”