Since our formation in 1969 we have published an extensive range of books and pamphlets on important issues for the city. 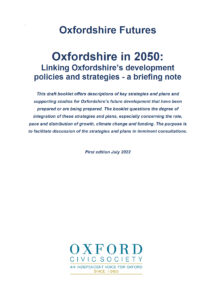 Oxfordshire in 2050 is a Guide to the many different strategies, plans and supporting studies for Oxfordshire’s future development that have been prepared or are being prepared. The booklet questions the degree of integration of these strategies and plans, especially concerning the rate, pace and distribution of growth, climate change and funding. The purpose is to facilitate discussion of the strategies and plans in imminent consultations.

The July 2022 edition of our newsletter “Visions” has a 2-page summary which you can download here. 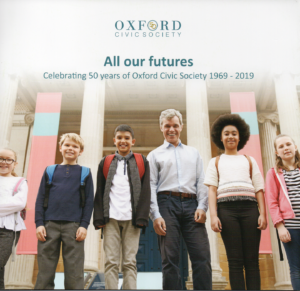 All Our Futures is a 16-page full colour brochure celebrating 50 years of the work of Oxford Civic Society, and looking forward to our contribution in the future.

The brochure is only available in printed form; it cannot be downloaded. Click here to buy a copy online – price £5 including postage and packing – or pick up a copy for £3 at any of our meetings. 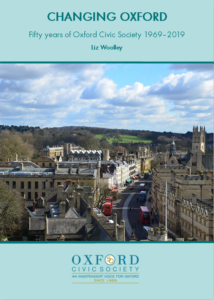 Changing Oxford: Fifty years of Oxford Civic Society 1969 – 2019 by local historian Liz Woolley is her assessment of our achievements over half a century.

Her highly readable account, set against the backdrop of a changing city, shows the Society’s influence on transport strategy, local and strategic planning, street lighting, green spaces, street clutter, 20mph speed limits on residential streets, litter, street parties …a long and impressive list. We can proudly claim to have changed the way planners and people think about some key issues in Oxford and beyond.

The report has 62 pages and is fully illustrated. You can download it freely here. 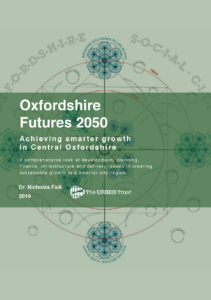 This new report commissioned by Oxford Civic Society, undertaken by Dr Nicholas Falk of URBED and based on five years of work, considers how central Oxfordshire should respond to the pressures for new housing. It follows the Society’s 2014 report “Oxford Futures: achieving smarter growth in Central Oxfordshire”, which called for “a spatial growth plan and a charter for sustainable development”. It is published as a contribution to work on the Oxfordshire 2050 plan and the Cambridge – Milton Keynes – Oxford arc.

The report recommends that development should be concentrated around existing and new stations on the local rail network in Central Oxfordshire and Oxford, including the re-opened Cowley branch, and on the 200 acres of under-used land around a rebuilt central Oxford railway station.

Read more about this report on the Oxfordshire Futures website, where you will find links to a two-page summary and  the full report itself. Cambridge is often admired for the way it has succeeded in attracting research-led investment and employment growth, much of it associated with the university. This success has also seen essential infrastructure including housing built. Oxford has made slower progress. What then can Cambridge teach us? Oxford Civic Society decided to send its own mission to Cambridge in spring 2016 to consider what has been working in Cambridge and what could or could not be applied in Oxford.

The group concluded that Cambridge’s success story has much to teach us – about the role of local government, the contribution of the university and the dedication of key individuals committed to finding a shared vision.

We have produced a short report summarising our findings. You can read this online on the Oxfordshire Futures website, or download a copy of the report as a pdf here. The response written by our Housing Policy Group to the Government White Paper “Fixing Our Broken Housing Market”. It was sent to the Department of Communities and Local Government as part of their consultation on the White Paper. In our response we took issue with the White Paper’s opening statement “The housing market in this country is broken, and the cause is very simple: for too long, we haven’t built enough homes”. We argued that there were (and are) many other factors contributing to the failure to build enough homes, explored the more significant ones and where possible suggested what might be done to solve the problems. On 31 March 2014 Oxford Civic Society launched a major report “Oxford Futures – Achieving Smarter Growth in Central Oxfordshire”. It argues that Central Oxfordshire is going to grow. It can grow smartly and we can all benefit. Or it can muddle its way through and lose out to better organised places. It says the only way to solve the problems arising from these growth pressures and bring about a prosperous future for the region is for all the different agencies to work together. This needs visionary leadership from the leaders of our communities, businesses and universities. The report calls on them to work together to achieve smarter growth. Read more on the Oxfordshire Futures website.

Report on ‘Clutter’ in vicinity of Wayfinding signs

Following a test audit of Turl Street by the Oxford Civic Society, Gordon Reid, City Centre Manager, suggested that we might inspect city centre locations in the vicinity of the forthcoming Wayfinding signs to identify items of street furniture which might be removed. Specifically we were asked to identify items which are under the responsibility of the City Council. The Oxford Civic Society, working with the Oxford Pedestrians Association, carried out inspections in late March.

On Foot in Oxford

The Streets for People team in association with Oxford Pedestrians Association (OxPA) plans to extend its programme of activities, working with the local authorities, to make the city and its neighbourhoods even more welcoming for those on foot. Called ‘On Foot in Oxford’, the programme will extend the spirit that inspires those initiatives to the city as a whole. ‘On Foot in Oxford’ is not simply about improving the appearance of the city; it is about improving its ‘feel’.  Oxford Civic Society and OxPA are delighted to work together on this programme.

Forty Years of Oxford Planning is the published text of a lecture given in 2009 by the then President of the Society, Mark Barrington-Ward to mark its 40th year. It is essential reading for those who want to understand today’s Oxford and to look into its future. It gives a unique insight into the ebb and flow of transport and planning policies, their successes and failures, as they have moulded the city we experience today. You can read the text of the lecture here (without illustrations), or download the complete booklet in pdf format here. (Warning – this is a 240Mb download!)

Data resulting from a members’ survey of bus travel within the city boundaries, for discussion with bus companies and Council officers. The second in a series of occasional publications that seek to address the principal concerns of our members. This booklet explores the vitally important question of how best to encourage greater use of public transport, thus reducing individual dependence on private cars.

The first booklet of the series, in the form of a report demonstrating the poor quality of the streetscape in Oxford. It highlights some of the many problems that create an overall impression of clutter and chaos – and suggests some ways forward to City & County planners.

Visions for Oxford in the 21st Century

A diverse collection of essays provides an extended vision of how Oxford and its region might develop in the next few decades. Written by experts in their field, the overall aim is to prompt widest possible discus-sion of the many challenges and the opportunities that these present.

We do not have a digital version of this booklet. Remainder copies may be available either by mail order for £7.50 (contact us to enquire) or from Blackwell’s Book Shop, Broad Street.

Transport and the Future of Oxford

This publication was hugely influential to the emerging Oxford Transport Strategy – a matter of fierce debate and wide importance then as now. As a case study for all those concerned for the urban environment in ancient cities, the book gives a platform to varying views and offers some ways forward. The book is held alongside 6 other titles through the Centre for Oxfordshire Studies This book is very relevant to local authority planning departments and university schools of planning and transport. 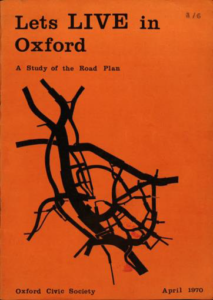 This booklet was written by members of Oxford Civic Society in 1970 to describe and debate the City’s plans for the road network. Many issues that were at the forefront of our minds then are still relevant now.