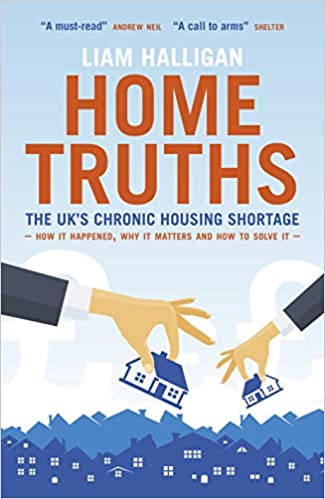 Halligan is an economist by training, principally involved in journalism. His book was written in the Autumn of 2019, it seems prompted by what he sees as a chronic shortage of house-building, and a crisis in affordability. He sets out the background and history of housing supply during the 20th century, concludes that the rate of development of new homes has been nowhere near enough to accommodate population growth and the potential demand for household formation, and goes on to examine in detail many of the causes of this situation and to make proposals for how it can be remedied. His central argument, in his words, is that “we must radically reform the supply side of UK housebuilding … particularly the opaque and deeply disfunctional market for land.”

The big villains of his analysis are, firstly, the politicians who, in several steps, emasculated the ground-breaking Town & Country Planning Act of 1947, which, apart from beginning to regulate urban planning, firmly set the value of developable land as that of its existing use. The elimination of this principle was finally achieved by the passing of the 1961 Land Compensation Act, confirming to owners of development land windfalls of huge multiples in its, typically agricultural value.

The other big villains are presented as the 4 or 5 largest house-builders, who completely dominate and manipulate the market, indulging in a whole array of malpractices, in order to generate massive profits and astronomical rewards for directors.

In discussing the affordability of housing, Halligan rightly points out that the biggest component of house prices is the land value, and, from that he suggests that it is this that makes housing unaffordable. Later in the book, however, he explains that land values are determined by ‘residual valuation’, i.e. by assessing the gross returns from the completed development and deducting the costs, such as building costs, financial contributions (like S.106 payments and CIL), and so on. The implication is that the selling price of the completed houses determines the land value, not the other way round. This latter analysis is, of course true; as in any market, house prices are set by what buyers are prepared to pay, not by the costs of production. And although housing, especially around Oxford, is considered ‘unaffordable’, the fact is that transactions take place – there are buyers able and willing to pay exorbitant prices for houses, but they do not include very many who are essential to the running and staffing of our neighbourhood schools, health and community centres, social services, parks etc. ‘Unaffordability’ thus raises issues of wealth discrepancy and how we value jobs, perhaps more than the price of developable land. Halligan recognises house ownership and high prices as contributors to wealth inequality, but not as a consequence of it, possibly because it is a subject way beyond the remit of this book.

He quotes a wealth of statistics on housing, including figures showing the rapid decline in home ownership in the last 20 years, and increase in private renting. One failing, perhaps, is that although he alludes to insecurity, he does not explain very fully why tenants in privately rented property are at such a disadvantage in this country. Perhaps a reference to the introduction of the Assured Shorthold Tenancy by the Housing Act of 1988 would have deserved a mention.

Halligan does expound on the perceived desirability of ‘a home of one’s own’, the manner in which the market is broken (as conceded in the government White Paper of 2017) and the machinations of ministers which have created, or at least exacerbated the situation. He refutes absolutely those who suggest there is no shortage of housing, and he is coruscating in his description of the oligopoly of big housebuilders. Perhaps his strongest criticism is of the Land Compensation Act of 1961, which very effectively transferred the wealth generated by the granting of development consent from Local Authorities – the grantors – to the landowners. He devotes a chapter to the merits of Local Authority involvement in housing and is deeply critical of the implementation of measures such as the Right to Buy.

Halligan’s ‘Manifesto for Change’ lists 10 issues to be addressed:

1.      Land value capture: the return to pre-1961 days when at least part (Halligan suggests 50%) of value uplift should be available to Local Authorities, to provide infrastructure.

2.      New towns: to build on the success of places like Milton Keynes.

6.      New-build homes policy: rescinding of ‘Right to Buy’ and greater protection of buyers from exploitation such as leasehold sales and gross defects.

7.      State-owned land: the selling-off of government-owned land for housing development.

8.      Land ownership transparency: removal of secrecy as to just who owns land in the UK.

9.      Rescinding the ‘4-year’ law: removing the automatic right of a development to remain, without it having been granted planning consent, if no action is taken within 4 years.

10.  Structure of the industry; opening up opportunities for small and medium-sized enterprises and breaking down the oligopoly of the big housebuilding companies.

The book reads like an economist’s view of the flaws in the market on which we have, by and large, depended on for the last 40 years to provide the basic need of habitat for our human population. It does not delve into the detail of where we should build housing, or of how it should relate to the nature and location of economic activity, or of what 21st century development should look like, or the transport and connectivity issues surrounding it. Perhaps most importantly, it mentions climate change only once in the introduction, and not at all in the context of what needs to be done in regard to housing provision.

The ‘radical reform’ required, Halligan suggests, is necessary to address social disengagement and wealth inequality, and, not least, since it was evidently written in the wake of the 2017 General Election, but before that of December 2019, to avoid the prospect of a Corbyn-led government! For all its flaws and omissions, this is a worthwhile read, and makes some pretty convincing arguments for political action, by any government.