Our response to the Preferred Options consultation document 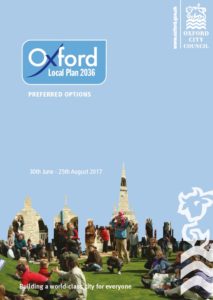 Oxford Civic Society has submitted comments on Oxford City’s ‘Preferred Options’ document which is the latest stage in preparing a new Local Plan for the City. We have reviewed all 107 Preferred Options. We agree with 34 of them and agree with a further 61 with reservations and suggested refinements. We do not agree with 11 of the Preferred Options. We have added an additional option for consideration. We also comment on strategic planning issues including the coordination of Oxford’s Local Plan with those of the neighbouring Districts, city centre polices and the synchronization of Oxford Local Plan preparation with current and planned city-wide and city centre transport studies. Our heartfelt thanks go to our Planning, Transport, Housing and Oxfordshire Futures Groups for their hard work in preparing this response.

Inevitably, our full response is a long read. You can download it here. It needs to be read in parallel with the City’s Preferred options (also a long read), which is here. However, we have drawn out some of the points which we feel we need to make most strongly and summarise them below. Given Oxford’s desperate shortage of affordable housing it is not surprising that many of our major concerns are in this area.

We also sent a supplementary comment on Dunstan Park, Headington arguing that it should be classified as not suitable for development.