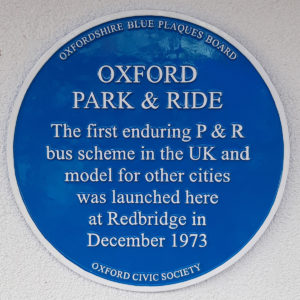 A Blue Plaque commemorating the launch of Oxford’s Park & Ride scheme in 1973 was unveiled at Redbridge by Oxfordshire Blue Plaques Board in association with Oxford Civic Society on Friday 1st November. The Park & Ride is being commemorated as a landmark in the way traffic in towns can be managed, and the continuing benefits that Park & Ride has brought to Oxford.

For many decades up to the 1960s Oxford planned to solve its traffic congestion problems by building new roads. As scheme after scheme was hatched and eventually rejected, Oxford reacted to changes in the national mood by starting to think about ways to restrict car use in the city centre. The Balanced Transport Policy was born.

Oxford Civic Society’s first publication, “Let’s Live in Oxford“, strongly advocated this approach and the Society was very influential in bringing about the change of policy. Park & Ride was one of the key suggestions along with bus lanes and other measures. The first attempt at Park & Ride was a temporary service from November 1964 – August 1965*  at Fortes Motor Lodge to the north of the city. This was followed in December 1973 by a permanent service running from Redbridge.

Since then the service expanded rapidly to provide the five P&R bus routes which now serve the city. The Oxford scheme was the first enduring initiative of its kind in the UK. Some other cities had experimented with the idea but had not been able to sustain it. The Oxford scheme became a model for other cities wanting to introduce P&R systems.

The Civic Society proposed this Blue Plaque as part our 50th Anniversary this year. Chairman Ian Green says, “We are proud to have been among the first advocates of Park & Ride as a way of controlling congestion in towns. Campaigning for sustainable transport is still one of our priorities.”

The plaque was unveiled by the Lord Mayor Craig Simmons. Peter Headicar, former Reader in Transport at Oxford Brookes University and Phil Southall, Managing Director of the Oxford Bus Company both gave short speeches in appreciation of the Park & Ride scheme and Oxford Civic Society’s role in getting it introduced in Oxford.

In this video Peter Headicar expands on the background to the scheme and the role of Park & Ride schemes in helping to reduce traffic congestion.

* (Note: In the original version of this post we said the Fortes Motor Lodge service was set up for Christmas 1968. This date was a mistake, now corrected.)