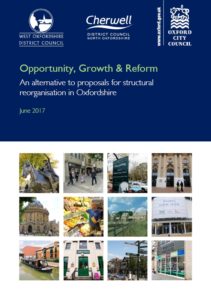 Oxford City, Cherwell and West Oxfordshire Districts have combined to draw up alternative proposals for the future structure of local government in Oxfordshire which they have submitted to the Secretary of State for Communities and Local Government.

Instead of the single unitary organisation favoured by the County, South Oxfordshire and Vale of White Horse District, the counter-proposals put a case for a Combined Authority, with the four districts, the City and the Oxfordshire LEP working through a strengthened Oxfordshire Growth Board.

Oxford Civic Society will be commenting fully in the near future. Meanwhile in an interview on BBC Radio Oxford on Monday 26 June our Chairman Ian Green said:

In our view both of those proposals should really be withdrawn, and then a discussion with everybody, with all the stakeholders, to try to achieve a consensus on what the governance arrangements should be. And then let’s get together with a devolution proposal which will enable us to get the funding – the heavy duty funding – needed for the infrastructure for transport and health.

The three districts’ proposals, “Opportunity, Growth and Reform” can be downloaded from the link. The interview with Ian on BBC Radio Oxford is on iPlayer until 25 July. It starts at 38’35”.